This weeks prompt by Amy Johnson Crow for the 52-Ancestors-52-Weeks challenge is “A Favourite Photo”. Now I’m sure I have more than one favourite photo, however I have chosen a photo of my 2 x great grandmother Ann Greene as I would like to be able to find out more about her life. 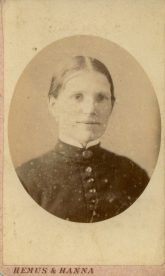 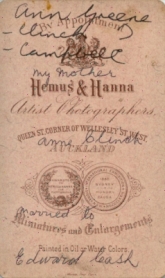 I was sent this photo from a relative in New Zealand of Ann with an ‘e’ or without an ‘e’, that I am not sure. All the records I have are without the ‘e’ and the surname Greene is with an ‘e’.

Ann is the grandmother of my grandmother, Annie Norma Lymburner on her maternal side.

On the reverse, Annie Cash wrote that it was her own mother, Anne Clinch who married Edward Cash, however, we are certain it is Ann Greene.

I had been writing to Wynn Denney, an adopted great-grandson of Ann’s, from New Zealand before he passed away several years ago. He was interested in his adoptive family’s tree and had sent some original photos for me to keep (I have the letter stating same).  On looking at this photo of Ann Greene, she would be someone that I would love to sit down with at the kitchen table, over a pot of tea and biscuits and have a conversation about her past. It might go something like this:-

Ann, tell me more about yourself.

When did you arrive in Tasmania?

Do you remember the name of the ship? You know, with a name like Greene, you’ve made it very difficult for me to trace your steps.

You came out to Tasmania with your parents, Thomas Greene and Ann nee Wright and a sister Matilda. What happened to Samuel, your baby brother, who appears on the 1841 census for Shoreditch, London?

Why did you leave England and come out to Tasmania, a convict state at that?

Was your father in some kind of trouble too? He’s only a shoe maker. By what means did he pay for your travel before 1851?

Your father was from Ireland and you were born in Ireland too. So how did you end up in England? Your mother, sister and brother were all born in England. Not that I have found their birth/baptism records, I’m just going on what your parents filled out on the 1841 census.

I know your mother died in Hobart, in 1853, when she was just 38 years of age and is buried at St David’s churchyard. You hadn’t been married long, just two years. She must have been poorly as her death entry says she had inflammation of the lungs and had previously given birth to another unnamed child in 1852 and lost a baby in 1850.

Whatever possessed you to marry a convict? You were only 17 years old and had to get permission from the authorities? And your sister Matilda!! She married a convict too and was only 16! Ann, what was going on?

I do note, however, that you both left your convict husband’s and married again. Well, I have a trail for Matilda, now with a good family, the Gamfield’s and I’ve located her burial at Rookwood Cemetery in Sydney, but I can’t find when you married Neil Campbell.

Where did you go? What did you do when you left John Clinch?

Where did you meet Neil and did you really marry him? Perhaps not as maybe John was still alive (I did find he ended up in Pentridge Gaol in Melbourne, Victoria for stealing horses in 1856!)

Were you pregnant then? You had two littlies to care for, Ann and Emily. There’s also George too born around 1857, where, is a mystery!!

Is he John’s child? Possibly, as when George married in New Zealand, he said his birth name was Clinch and he now goes under the name of Campbell.

By this time, you would have had three littlies to care for, so perhaps you just fell into a relationship with Neil and didn’t marry him at all, even though on your youngest daughter Jessie’s birth certificate, you’ve stated you were married in Sydney in 1865. Hmmm, likely story!!

Your family didn’t know either, because when you died, they said you’d married Neil Campbell when you were 17, in Melbourne, Victoria.

You then went on to have six more children in New Zealand to Neil, including my great grandmother Alice Zenobia born in 1870.

I know you lived in Auckland, New Zealand for 18 years, Neil was a tailor and had his own business. You’ve brought the girls up to be very musical, their names appear in the newspapers in New Zealand for their singing ability. Alice had a contralto voice too!! Would love to hear her sing some day.

I heard a story that you went to America? Would that have been to Nova Scotia, Neil’s birthplace? I had my DNA checked recently and Nova Scotia came in as being a place that I’m connected to on my ethnicity. Pretty cool, don’t you think? I have my great great grandfather’s genes.

It looks like you’ve then crossed the ditch back to Australia and travelled in all of the states, including Western Australia for 18 months, South Australia six months, 15 in New South Wales before staying in Melbourne, Victoria where Neil died in 1891. He was only 49 years old, very young indeed.

You went on to live to be 80 years of age. You granddaughter Norma told me that she was 21 years of age when you passed.

In one of Wynn’s typed letters, he wrote that other members of the family “would have known a lot”, but had since died by the time I had contacted him and that I was too late for them!! Although I did get to meet Wynn and his wife on a holiday to New Zealand in 2007.

The limited information I have about great great grandmother Ann has been extracted from birth, death and marriage certificates, criminal records and newspaper articles. I have these sourced on my computer.

This photo below is one that Wynn also sent to me and inscribed on the back “to Annie from mother.” Oh how I wish these people had been named. We are pretty certain this is Ann nee Greene and Neil Campbell with two of their sons, maybe Neil and Zeno or possibly Augustus. The ladies dress is the same as the one in the photograph of Ann above. The “Annie” would have been Wynn’s grandmother, Annie Clinch, daughter of Ann Greene and John Clinch. They are standing in the front of a shop which is possibly Neil Campbell’s tailor business.  On zooming in on the photo, I can see what looks like jacket patterns in the bottom corner of the window. Between the two boys is a sign with the letters AMPBELL, …OLIN. Gee, you think they would have moved over a bit and not stood in front of the sign!! 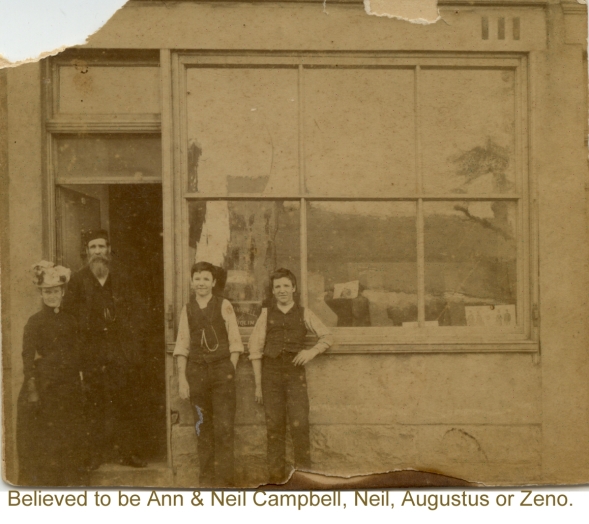 Just a person who is looking forward to retirement and enjoying the golden years!
View all posts by Jenny MacKay →
This entry was posted in 52-Ancestors-52-Weeks, Blog, Campbell, Green and tagged Alice Zenobia Campbell, Ann Greene, Annie Norma Lymburner. Bookmark the permalink.