There were several ways to use the prompt ten. My father was one of ten children, my grandfather was one of ten, including two step-sisters and I was just ten when my grandmother died. However, this newsletter will be about the ten ancestors that we introduced our grandchildren to during the October 2018 school holidays.

The idea came about when I was listening to a podcast (digital online interviews) by The Genealogy Guys. The interviewee mentioned how she had first become interested in family history when she went to a cemetery with her grandmother. Well, that got me thinking. Three of our grandsons were soon coming to visit for the school holidays and I know they need to be kept busy or they’ll spend all their time on electronic devices. I guess our children’s generation was addicted to TV. I read somewhere recently that the generation that went from chalk slates to writing on paper, was horrified that the skill of using slates would be lost. Guess it has!

I knew we could find most headstones of both my husband and my parents and grandparents, which would be the boys 2 x great-grandparents. By the time we’d finished, we had found ten ancestors and had the grandchildren’s photos taken with them. Fortunately, the cemeteries weren’t too far away and we knew where each of the graves were located. Well, we thought we knew!

Our first stop was at the Utakarra Cemetery in Geraldton. Here we visited my own mother’s grave, Dulcie Patricia Cripps nee Herbert. Not that the Herbert is on her headstone, but I had printed out a family tree chart for each of the boys so they could tick off the names of those we visited. Bob’s parents, Donald and Sarah MacKay nee Thomas, were also buried at Utakarra. One thing the eldest grandson noted, was how young each one was. Mum 59, Bob’s parents both 58! The boys were very respectful as we walked between the graves, being mindful of where someone might be buried even if there was no headstone.

My grandparents, James and Annie Herbert nee Caddy, were also buried at the Utakarra cemetery. James was also very young when he died at the age of 58 and my grandmother was 77. It makes one sit up and take notice as we have either passed those ages or getting close to the others. 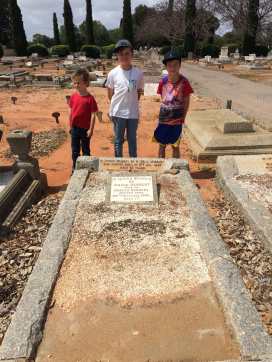 The next day we were taking our eldest grandson to my brother’s farm in Northampton, so we visited the Northampton Cemetery on the way where my father, Charlie Cripps (76) is buried along with my grandparents Tom (75) and Norma Cripps nee Lymburner (95). Now that’s a good age to get to!! 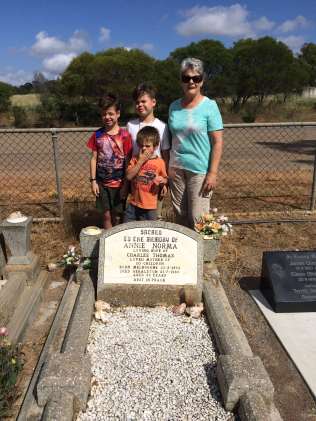 Bob’s grandparents were also at the Northampton Cemetery, Daniel (77) and Maria Thomas nee Mansell (77). Although we weren’t sure exactly where their grave was, as it had been some 20 years since we last visited, it didn’t take long to find them. 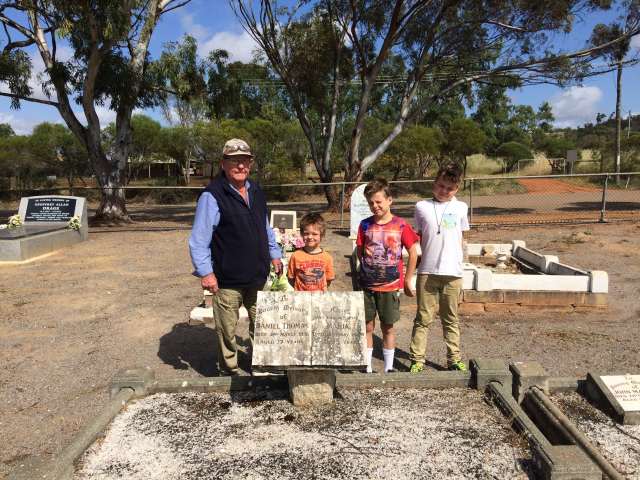 The only one of our grandparents that we weren’t able to add to the list was that of Bob’s paternal grandparents, James (84) and Isabella MacKay nee Sutherland (62) as they both died in Scotland where the family originated.

My great-grandfather Charles Thomas (68) and Margaret Cripps nee Williams (64) are also buried in Northampton. The boys had their photo taken at their gravesite so they will know about them too.

I pointed out the graves and took photos of my brother, Robin Cripps (49), my cousin Chris Mainwaring (42) and niece Dellys Cripps (18).

There were many other photos we could have taken, but I think that was enough and hopefully one day, the boys will take an interest in their family history. One can but hope.