Family history research can take you on some wonderful journeys as you try to piece together the jigsaw puzzles of one’s ancestry. There is one surname in our family that catches me side tracking to, all the time. That is the name of Lymburner, my grandmother’s maiden name on my father’s side and our connection to the name goes back 100s of years to the 1700’s. My blog this week is how I found an ancestor at a very obscure cemetery!

I’d heard the story from my grandmother Annie Norma Cripps nee Lymburner, that her maiden name had been changed by deed poll, from Delisser to Lymburner. Really? I wonder why? I wrote about how I discovered the name change and why this had occurred in my blog “Where there’s a Will“.

The will was filled with so many names, that I wanted to find out where each one fitted into the family tree. My great great grandfather Adam Lymburn Delisser, was requested to change his name from Delisser to Lymburner. He became known as Adam Lymburn Lymburner and inherited a substantial sum of money too. So, if nothing else, that would have been a good incentive. It was also because the name Lymburner had not been carried on from 3 brothers who left Kilmarnock, Scotland and carried out the business of fishing, sealing, fur-trading and whaling out of Quebec. John died at see, Matthew didn’t have any sons, although he did have an illegitimate son and we were fortunate to meet his descendants in Montreal in 2002, and Adam (snr) never married or had children. It was he who requested the name of his grand nephew be changed to continue on the Lymburner name.

Adam Lymburn Delisser was only 12 years old when his father, Alexander Delisser, surgeon, had the name changed from Delisser to Lymburner in 1836. My journey had me trying to discover a little more about Alexander. Who was he? Where did he come from?

I found Alexander had married Deborah Crawford in London in 1823, a direct descendant of Matthew and Agnes Crawford nee Lymburner, sister to the 3 brothers.  But, I wanted to know more about Alexander himself. He left a bit of a trail, mainly as a bankrupt in 1828 and a surgeon. I wrote to the Royal College of Surgeon’s and through their archives, discovered he had trained to be a surgeon in Jamaica! Yes, you read that right, Jamaica. It took some piecing together and I found he had family in Jamaica and through DNA testing, we were able to establish that definite link.

In 1996, I contacted the Jamaican Jewish Historical Society and discovered that Dr Delisser had died 4 May 1844, aged 48 and was buried in the Protestant Cemetery Florence. In Florence? Italy? He certainly got around, first London, then Jamaica and finally Italy! But still no trace of where he was born.

I had been visiting the Latter Day Saints research library quite regularly at that time and ordered in a microfilm of the cemetery. How exciting was it to find the burial record and what a surprise to find that two of Alexander and Deborah’s children were also buried there.

A transcript from the Registers of Baptisms, Marriages and Burials for Florence, Italy reads – No. 67, May 7 1844, Deliper – Alexander Delisper M D of London, died May 4th 1844 and was buried in the Protestant burial ground at Florence the 7th May 1844 aged 50 years by me George Robbins, Chaplain. NB: The bodies of a son and a daughter of the above Dr Delifser were transferred from London and interred in the Protestant Burial Ground at Florence in the …of 1846 – no service was performed. G Robbins.

I had already purchased the death certificates of the two children who died within days of each other in 1845 and the tragic story that goes with them. More on that later. It appears they were first buried at St James Cemetery, St James, Middlesex, England but in 1846, they were exhumed and their bodies buried with their father in Florence, Italy. 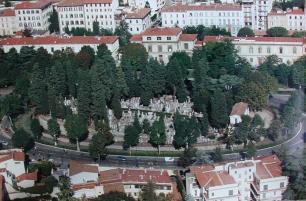 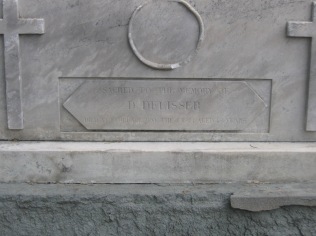 I’ve not established why Dr. Alexander Delisser was in Florence, only that he died suddenly in a carriage, having apparently predicted his demice a couple of years previously, saying he had about two years to live and would go very suddenly!

Deborah, his wife, died in 1867 and is buried at Kensal Green All Souls, Kensington, England.

Just a person who is looking forward to retirement and enjoying the golden years!
View all posts by Jenny MacKay →
This entry was posted in 52-Ancestors-52-Weeks, Blog, Delisser. Bookmark the permalink.